The spiral staircase to the left of the South Transept leads to St Marie’s Lady Chapel – also known as the Munster Chapel after Henry Munster, who contributed to its development.

The staircase contains two stained glass windows designed by John Francis Bentley [1839-1902], the architect who went on to design Westminster Cathedral and who also designed the wooden casing for the Lewis organ in St Marie’s Sanctuary.

The first window shows the Annunciation and is dedicated to the memory of Carolina Bernasconi, who died in 1879, aged 16, while the second is a depiction of St Joseph, erected in memory of Charles Rimondi and his wife, Constance.

The dedication under the Annunciation window reads: Pray for the soul of Carolina Bernasconi who departed Feb 18 1879 on whose soul Jesus have mercy in her XVI year, while the dedication under the St Joseph window reads: Of your Charity pray for the eternal rest of Charles Rimondi sometime of Halifax who died at Sheffield 23 of April 1861 aged 60 years and of Constance his wife who died at Sheffield 13 of September 1879 aged 72 years on whose souls Sweet Jesus have mercy. Amen.

Both the Rimondi and the Bernasconi families – whose name is also spelt Bernascone and Barnascone in local records – were Swiss Catholics working in similar lines of business.

Charles – a jeweller, silversmith and maker of watches, clocks and chronometers – and his wife, Constance left Switzerland to set up business in Halifax around 1837 – about 17 years after Lewis Barnascone and his wife Martha arrived in Sheffield from the small Swiss town of Mendrisio, close to the Italian border and city of Como.

In 1857 the Rimondi’s eldest child, 25-year-old Savina, married Lewis Barnascone’s brother, Henry, who had moved from Switzerland to Sheffield, in 1851 to join the opticians, cutlery and hardware business Lewis had established in Waingate.

The Annunciation window is a tribute to their third child – and Charles and Constance’s grand daughter – Carolina, who died seven months before her grandmother.

Charles and Constance lived in Halifax until not long before Charles’ death in 1861, when they moved to Sheffield with their teenage daughters, Rosa Maria and Emily Angelina.

Six years later Emily would marry Charles Hadfield, son of St Marie’s architect, Matthew Ellison Hadfield, and the designer of several features of the Cathedral, while Rosa Maria continued to live in the city until her death in 1936 at the age of 94. 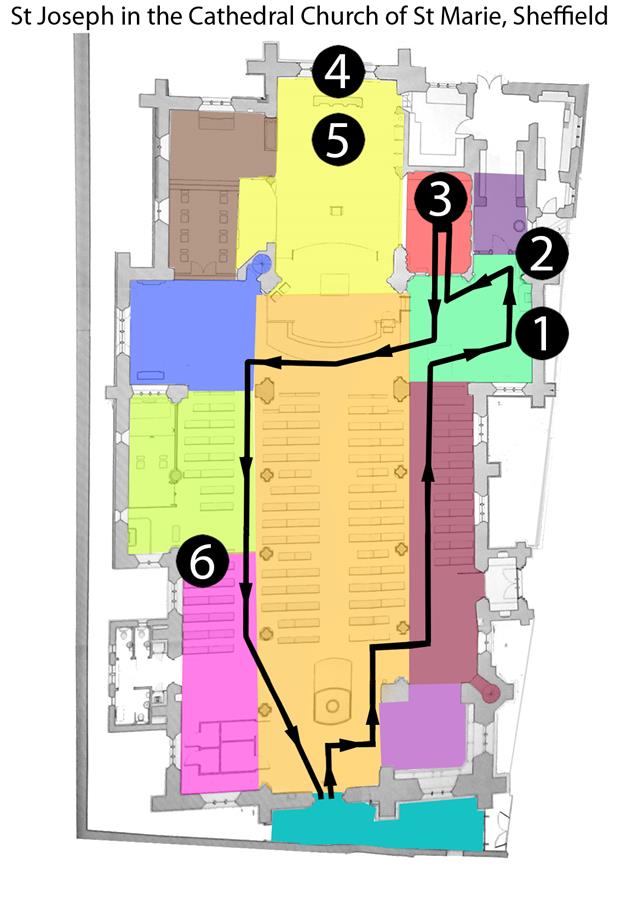