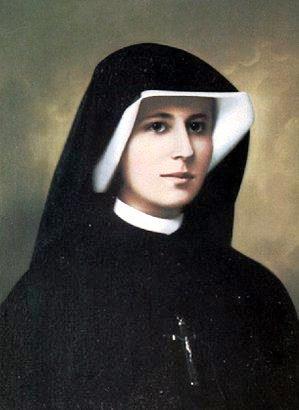 St Faustina, born in Poland in 1905 as Helena Kowalska, came from a poor and religious family. As the third child of ten, she first felt called to the religious life when she was just 7 years old. Her parents refused to let her join a convent, so at 16 years old, she became a housekeeper to help her parents and support herself.

In 1924, Faustina experienced her first vision of Jesus. Jesus instructed her to leave for Warsaw immediately and join a convent. In April 1926, at 20 years old, she finally received her habit and joined the Congregation of the Sisters of Our Lady of Mercy, taking her first religious vows as a nun 2 years later.

In February 1931, Faustina was visited by Jesus, who presented himself as the “King of Divine Mercy”, wearing a white garment with red and pale rays coming from his heart. Jesus asked her to paint an image according to the pattern she could see, with the inscription: ‘Jesus, I trust in You’. Jesus also explained that He wanted the Divine Mercy image to be “solemnly blessed on the first Sunday after Easter”, and for that Sunday “to be the Feast of Mercy”. Not being able to paint herself, the image was finally captured 3 years later and has become well-known all around the world.

Her visions of Jesus continued, and her confessor encouraged her to keep a diary of them. In September 1935, Faustina wrote about her vision of the Chaplet of Divine Mercy; used to obtain mercy, trust in Christ’s mercy, and to show mercy to others. In July 1937, the first holy cards with the Divine Mercy image were created, with Faustina’s instructions on how to say a Novena of Divine Mercy – another message from Jesus.

Faustina had always suffered with ill health, and on 5th October, 1938, aged just 33 years old, she passed away. Her entire life, in imitation of Christ’s, had been a sacrifice – a life lived for others. At Jesus’ request, she willingly offered her personal sufferings in union with Him to atone for the sins of others. She was buried in Krakow, Poland.

St Faustina Kowalska was beatified in 1993, and canonised in 2000 – both by Pope St John Paull II. Her feast day is celebrated on the 5th October, and she is the patron saint of Mercy.

The Chaplet & Novena of Divine Mercy 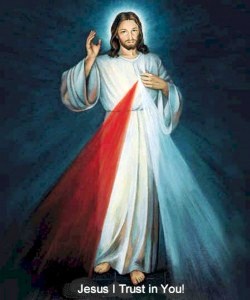 Our Lord gave St Faustina a powerful prayer He wanted everyone to say: the Chaplet of Divine Mercy.

The Chaplet can be said anytime, but Jesus asked that it be recited as a Novena especially on the nine days before the Feast of Mercy (starting on Good Friday). (A ‘novena’ simply means ‘nine’, and usually refers to saying the same prayer on nine consecutive days).

He promised, “By this Novena (of Chaplets) I will grant every possible grace to souls”.

The sign of the Cross, Our Father…, Hail Mary…, The Apostles’ Creed.

Eternal Father, I offer You the Body and Blood, Soul and Divinity of Your dearly beloved Son, our Lord Jesus Christ in atonement for our sins and those of the whole world.

For the sake of His sorrowful Passion, have mercy on us and on the whole world.

Holy God, Holy Mighty One, Holy Immortal One, have mercy on us and on the whole world.

The Novena of Divine Mercy:

You can download this attachment to help you pray the Chaplet of Divine Mercy. This download also gives you the additional opening and closing prayers, along with the theme for each day of the Novena:

Novena to the Divine MercyDownload

The Hour of Great Mercy is 3pm.

And this is the prayer:

“O Blood and Water, which gushed forth from the Heart of Jesus as a fount of Mercy for us, I trust in You.”

With your agreement, we use cookies to improve your browsing experience and to provide us information of the website use (Google Analytics); you can withdraw your consent at any time by clicking on "Manage cookies".
Manage cookiesAccept all cookies
Manage cookies consent